The Ekklesia of Christ 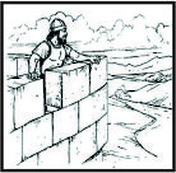 Chapter 3 - How Should We Then Live?

This was the question that the Lord said Israel was asking, and the response that the Lord gave them was, “I have no pleasure in the death of the wicked; but that the wicked turn from his way and live: turn ye, turn ye from your evil ways; for why will ye die, O house of Israel?” (Ezekiel 33:10-11). This is another of those passages that strikes a death blow to Calvinism that claims that God has determined some men to be condemned to eternal damnation; yet if this were so, how could the Lord say that He took no pleasure in the death of the wicked? God called Ezekiel to be a watchman to the children of Israel (Ezekiel 3:17; 33:7), someone who was to be on the alert for the approach of the enemy, one who was to sound a warning at the sight of a wolf, or a wolf dressed in sheep’s clothing. Yet even as God appointed Ezekiel as a watchman, He also told him that Israel would not listen to him (Ezekiel 3:4-11); so we must realize that the work of a watchman is not measured by how many heed his warning, but by his obedience in sounding the warning that God has given to him. What modern Evangelicals have lost is their fear of the enemy of their souls; too many of their watchmen have fallen asleep, worldliness has blinded their eyes so that they cannot see, and expediency has silenced their voice; like dumb dogs, they can no longer raise the alarm at the approach of the enemy (Isaiah 56:10). Today the watchmen who call out a warning are considered to be narrow-minded legalists who don’t understand the liberty that we have in Christ. What Evangelicals are no longer willing to accept is that our liberty in Christ has freed us from the bondage of sin (Galatians 5:1) so that we are free to serve one another (not ourselves, Galatians 5:13). We have been called to be holy as God is holy (1 Peter 1:15-16); that is our calling, and we are charged to walk worthy of it (Ephesians 4:1).

The question that Israel posed is one which we, too, would do well to consider. Now that Christ has redeemed us from sin, “how should we then live?”

There are several metaphors used in the Word of God to help us to understand what the ekklesia really is; Jesus openly declared that He is building the ekklesia, but what is it like? In determining how this ekklesia is to function (the “how should we then live” question), we will consider three metaphors used within Scripture to illustrate what it is that Jesus is building. As we begin to understand more fully what Jesus said He would build, to that same extent we will be able to grasp our holy calling in Christ Jesus (2 Timothy 1:9).